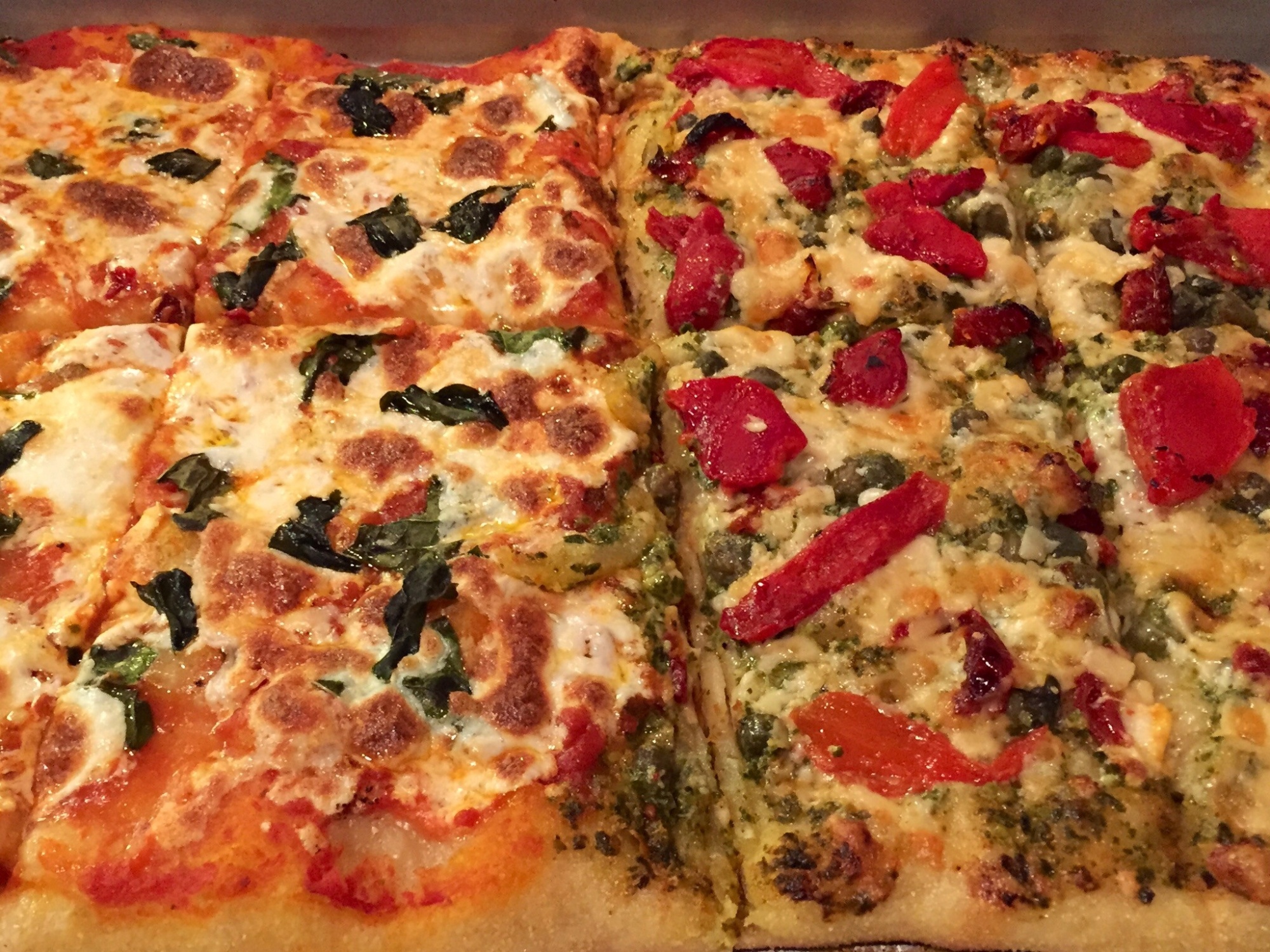 Over the course of the past five or six months, I have vigorously attempted (and failed, in my eyes) to craft the ideal pizza crust by way of my very own fingertips. My futile attempts have been marred by culinary tragedy, whether in the form of uninspired, non-rising doughs or overcooked bottoms. I can recount a few instances in particular: once in my brother’s apartment and twice at home, where the stars simply did not align for me in this endeavor. My yearning revolves around the idea of a relatively thick crust pizza dough, while not treading into the realm of deep dish. Enter Grandma-Style Pizza Dough.

Any pizza dough recipe seems simple enough at first glance and as I have found, bloggers and cooks alike preface their list of ingredients and instructions by saying so. I consider myself confident in the kitchen and am not intimidated by the many recipes that came across my path, however, I have not been able to find a dough to my liking. My frustration so far has stemmed from my misfortune in laying the initial groundwork for something as ethereal (yes, ethereal) as pizza. Surely, pizza factors into some part of the ‘American dream’ equation, no? With a teaspoon of trepidation, I gave this grandma-style pizza dough a try and it yielded success, albeit on my second attempt.

Varying slightly from other recipes of similar nature, this dough is left to rise in the refrigerator after the warm water and yeast are thoroughly mixed together. Sometimes, grandma’s pies contain vinegar, but this recipe nixes vinegar as an important component. This dough needs to rise twice, which directly contributes this dough’s memorable consistency. It also requires ample time and sustained patience from the cook. I found that 1/2 cup of oil was far too much to coat under the dough prior to cooking, so I curbed that amount to 1/8 of a cup while adding cornmeal as an an additional non-stick base.

As for pizza toppings, I loosely followed Bon Appétit‘s classic mozzarella pie along with the red onion-olive-provolone trifecta. As for the final third, I shaped my own variation; one that caters to my need for a saltier flavor. Capers, roasted red peppers, mozzarella, provolone, and pesto comprise the final third of the pie. As with any fish, chicken, and now pizza recipe: the distinguished capers truly shine through. There is even more reason to go light with the olive oil under the dough as it bakes, as pesto contains olive oil, too. Next time I’ll be adding sun-dried tomatoes into the mix, of which I did not have on hand at the time.

My initial pizza dough plight turned into a pilgrimage and I am quite proud that I have reached the end of mine. One day I hope to be stirring, kneading, rolling, stretching, tossing, and spinning dough as seamlessly and intuitively as the Italians. But for now: Grandma knows best. 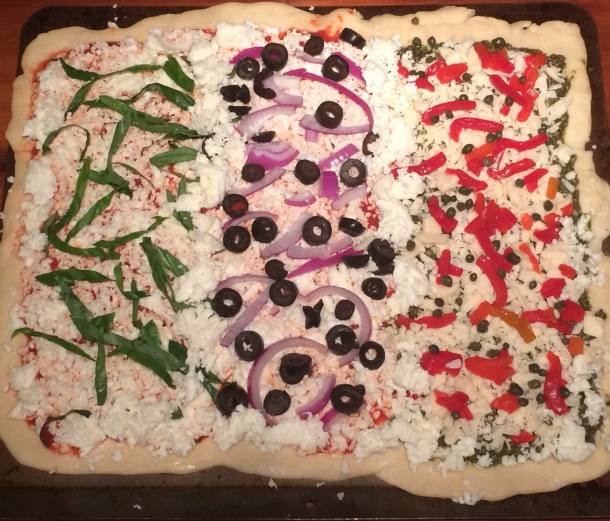 Mix in 2 Tbsp. oil, then salt and 2 cups flour. Add another 2 cups flour, a cup at a time, mixing until incorporated and a shaggy dough forms.

Turn out dough onto a lightly floured surface and knead until soft, smooth, and elastic, 10–12 minutes. Place dough in a lightly oiled bowl and cover with plastic wrap. Chill 24 hours.

Coat an 18×13” rimmed baking sheet with remaining ½ cup oil. Gently and gradually stretch dough until it reaches the edges of baking sheet. (If dough springs back or is stiff to work with, let it rest 10 minutes before continuing. You may need to let it rest more than once.

Cover dough on baking sheet tightly with plastic wrap and let sit in a warm place (but not too warm!—about 70° is ideal for yeast to grow) until it is puffed and full of air bubbles, 30–40 minutes.