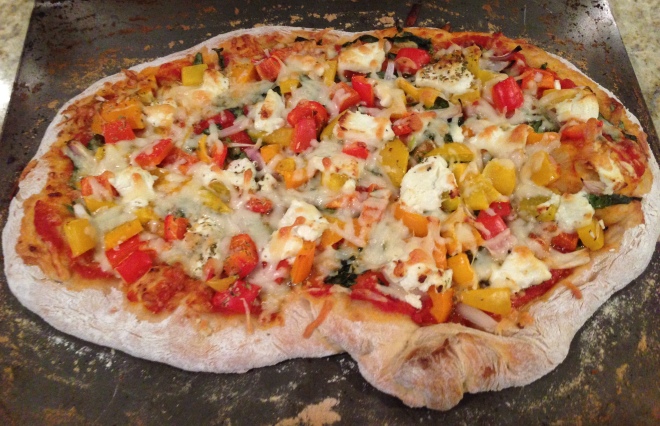 I finally accomplished something I have been meaning to do in the kitchen for years – devote an entire evening to pizza crafting. Growing up, my brothers and I would look forward to Friday evenings, when my father would come through the door in his suit with a pizza box in hand. The familiar scent of carefully crafted dough, tomato sauce, and cheese pervading the air never ceased to delight our senses. Friday evenings signaled the commencement of the weekend and perhaps more importantly: pizza night. As my brothers and I grew into ravenous (but polished) men, my father was then coerced into coming through the door with not one, but two pizza boxes. In the case of the Super Bowl, three. Flash forward to present day, where I take a bit better care of my health on a regular basis, but the yearning for pizza remains true. This summer, I elected Thursday nights to take the place of Friday pizza nights, with myself at the cooking helm. Homemade dough, fresh ingredients from the farm, and a heaping helping of cheese yield no greater comfort food.

There is quite a bit of freedom that comes along with making pizza from the comforts of one’s own home kitchen. Generally, I have a loose plan for which types of pizzas I’m going to create before I even start, with the notion that I might just deviate from the initial thought. More often than not, there are unexpected, last-minute additions to these blank pizza canvasses. The best pizzas I have made have been crafted organically, without much thought as far as measurements are concerned. For me, this is liberating because I’m a very “by the book” kind of guy. In turn, I revere the freedom that I now associate with pizza making.

I opted for the quintessential, classic margherita pizza as well as my take on a vegetarian pizza.

The classic margherita was chalk full of what one might expect: mozzarella, basil, tomato sauce/tomatoes, and a teaspoon or two of oregano. What I didn’t expect was how fickle the second batch of dough would be as I kneaded and melded it feverishly. To improvise further, I folded the dough over after adding the toppings and did so again, rounding out with more cheese, basil, and sauce. Without sounding too arrogant, both the vegetable pizza and the margherita uber-calzone turned out tremendously. Shallots and warm goat cheese are two of my favorite things and these ingredients seemed to enhance the garlic/olive oil base on the veggie pizza ten fold. The uber-calzone reminded me of a more gourmet version of DP Dough, a calzone food chain of which is found in many college towns throughout the country. My calzone, however, is advantageous in that it can be consumed while sober, unlike the dense, decadent mess that is DP Dough. I know this because as a desperate, undergraduate freshman I ordered a DP Dough and was hit with an unfortunate stomach ache for the rest of the night immediately after consumption. Another benefit to my uber-calzone is that I actually know what goes into it.

With the vegetable pizza, I improvised a bit by cutting up some fresh garlic cloves as well as drizzling a high quality olive oil to create a “white” base layer on the dough. The application of copious amounts of mozzarella followed, as did the strategic placement of shallots, colorful peppers, goat cheese, basil, olives, chopped and crushed tomatoes on top and around the edges, as well as a few other accompaniments of which escape me.

As for the making of the pizza dough itself, I can assure you that the process itself isn’t hard, but does require some diligence. I obtained this dough recipe through my friends Steve and Laura, after I not so gracefully pounded slices from their culinary creation in a matter of minutes. Adding herbs to the dough is a nice touch, particularly along the edges of the dough before baking. I suggest doubling the dough recipe (as the dough itself can be fickle) and using plenty of flour as you knead, stretch, and mold into the ideal dough shape. Other than that, it really takes no time at all. Store-bought dough works just as well and is fairly cheap at most supermarkets.

As I mentioned before, I didn’t follow a definitive recipe per-say (pizza making is intuitive), but I’ll walk you through my own process below:

First, cut and prep your toppings. I sliced basil slices and chopped olives, tomatoes, peppers, shallots, etc. Grate or shred cheese mozzarella cheese if you have it, otherwise buy it shredded.

Preheat the oven to 450 degrees F.

Next, make your dough (or buy it cheap from the grocery store, if you prefer):

Lastly, add various toppings and sauce and bake for 12-15 minutes or until the crust is golden brown.