Out of all of the restaurants I’ve frequented in New York City (which actually isn’t that many in actuality), Bareburger is comes to mind as one of my “go-to’s” over the course of the last year. I seemingly find myself there at least once every two months, if not more.  Bareburger fare consists of juicy, organic burgers, fresh garden salads, and mouth-watering appetizers such as sweet potato croquettes and crispy zucchini sticks paired with irresistible dipping sauces. However, the sole focus of this post is neither centered around the burgers nor the dipping sauces, but on the crispy zucchini sticks that melt in one’s mouth upon consumption.

The zucchini sticks were the first appetizer I opted for during my maiden trip to Bareburger and I generally order them about 80% of the time. This recipe, which is taken from the ‘Food Should Taste Good’ brand and website, mirrors the Bareburger zucchini sticks for the most part. One of the major differences between my recipe and the restaurant recipe is that mine are baked instead of fried (That being said, I recommend trying both). The ingredients are quite simple: a few zucchini, Panko bread crumbs (Italian-style), eggs, flour, lemon for both the zest & juice, olive oil, salt, and a dipping sauce of your choice. In this case, I gravitated towards the recommended marinara sauce. I added some fresh basil leaves to the mix to give the sauce more flavor and because quite honestly, you can’t go wrong with a little basil in almost any recipe.

The most time-consuming part of this recipe is dipping the freshly cut zucchini in the triad of flour, egg, and Panko/parmesan/lemon zest mixture. Once you’re over that hurdle, you’re practically home free. Just add a bit of olive oil and salt over each stick for added flavor and texture and you’re all set to toss them in the oven for about 15-20 minutes. The recipe doesn’t really specify when to utilize the lemon juice, but I would avoid mixing it in with the Panko/parmesan/lemon zest mix. The mixture will thicken and it becomes harder and harder to apply to the flour/egg coating on the sticks.

As a (relatively) newly minted mid-twenty something, I’ve come to the conclusion that zucchini sticks are now my mozzarella stick equivalent, which was a prominent addiction for the majority of my childhood years. In the future, I’m also going to dedicate an entire post to the addicting dipping sauces that can be found prominently on the Bareburger menu. This healthy recipe is perfect for an appetizer or side dish. Here’s to hoping you’ll come away from this one devoid of the guilt you may or may not feel after housing that plate of greasy mozzarella sticks.

While you’re at it, head over to Bareburger and engulf one of their organic and all-natural burgers, especially if you live in close proximity to New York City. 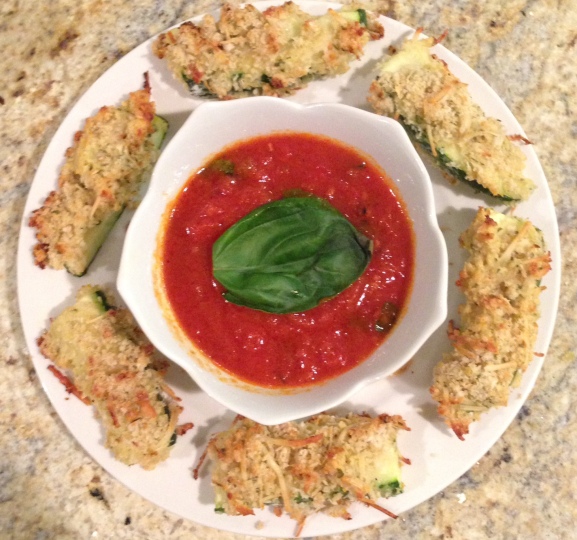 Preheat oven to 450 degrees. Line a baking sheet with parchment paper, set aside.

Combine Panko with grated Parmesan and lemon zest, mix together. Dust each zucchini stick in flour, then dip into beaten egg. Shake off excess egg, then coat with Panko mixture and place on baking sheet 1 inch apart.

Drizzle olive oil over sticks, sprinkle some salt over them, (and add lemon juice on top, if necessary) and bake for 15-20 minutes or until golden brown. Serve with a lemon wedge and cup of warm tomato sauce for dipping.