This week has been a fairly productive week for me on the cooking front. I set an intention to cook or bake something once a day Monday through Friday this week and so far, I’m staying true to my word. Monday night I made the Peach Cobbler and Tuesday night the kitchen air was filled with the aroma of a southern delicacy we’ve come to know as pimiento cheese spread. Because I’m insatiable and have concocted the aforementioned cheese pimiento spread a countless number of times, I decided to make two different recipes to taste test. All you need to know is the version with the shallots came out the victor. That version can be found here.

Last Wednesday night, I came home from exercising with a hankering for something light, yet satisfying. I also wanted something that would in some way offset the mounds of pimiento cheese spread I’ve been spreading on virtually everything this week. It is still summer after all, so these recipes aren’t hard to come by. By the time I had stretched and showered, I decided that the most viable option at 8 pm at night was to turn to the genius within the Plenty cookbook. I was gifted this gem in the spring and despite being initially hesitant to actually cook up vegetarian meals of my own, I can definitively say that this cookbook has changed my ways completely.

For those that aren’t familiar with the brilliance of Yotam Ottolenghi, the chef and author of Plenty, he is equally revered for the culinary magic in his food as well as the aesthetically appealing photos that accompany his masterpieces. He owns four “haute-couture to-go food shops” in  some of London’s premiere areas and also writes a weekly column for London’s The Guardian newspaper, in which he shares some of his favorite vegetarian recipes. The Plenty cookbook incorporates these recipes into one epic cookbook, organized into sections by ingredient. This cookbook encompasses everything from root vegetables to mouth-watering fruits to (one that I’ve been meaning to try) pastas like lemon and goat cheese ravioli.

Suffice to say, I had been continuously snacking once I walked in the door, so I knew the time had come to make something that wouldn’t stuff me completely. I began leafing through Plenty and finally decided on the luscious Watermelon & feta salad as well as the Herb-stuffed tomatoes. The sweetness and saltiness in both the watermelon and feta blend perfectly for a refreshing treat.  Yotam notes that this particular recipe reminds him of “sweaty nights on the seafront in Tel Aviv, when everyone is out enjoying beer, loud music, and often a heated conversation.” Sounds about right to consume on a humid, summer night in the Northeast in August. This salad is also super easy to make and is topped with thin slices of red onion, basil leaves, and a little bit of S&P and olive oil.

The herb-stuffed tomatoes are just as delicious as they are enjoyable to make. These require a discarding the seeds and most of the tomato flesh in order to make room for the herb stuffing. A lesson in patience, I found out, as I completely botched the first tomato on my first attempt. I’m happy to report that attempts 2, 3, and 4 went much more smoothly. The best part about this recipe is that (nearly) everything is farm fresh. Jersey tomatoes, onion, garlic, and the various herbs go so well together. The addition of the olives, panko, and capers really do set this one apart. I was even able to pluck some of the fresh herbs from my own backyard, a process that is gratifying within itself.

I figured I would post both my own documentation as well as the illustrations from Yotam’s Plenty, because every picture in this cookbook is incredible. I would be doing him a disservice not to take a “picture of a picture” here. I also highly encourage anyone reading this to pick up a copy of Plenty. It will change your (culinary) life.

Slice the feta into large but thin pieces, or just break it by hand into rough chunks.

Arrange all the ingredients, except the olive oil, on a platter, mixing them up a little. Drizzle over some oil and serve at once. 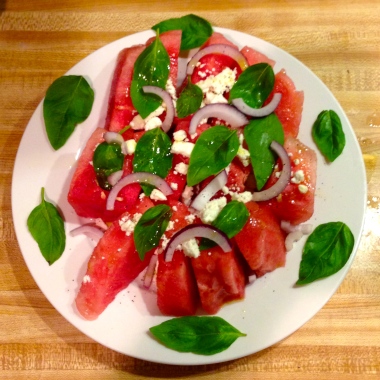 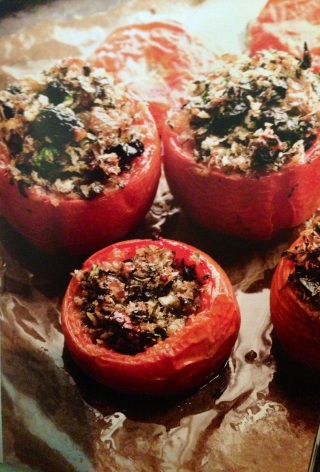 Preheat the oven to 325 degrees F. Trim off about 3/8 inch from the top of each tomato and discard. Use a little spoon or a melon baller to remove the seeds and most of the flesh, leaving a clean shell. Lightly salt the inside of the tomatoes and place upside down in a colander, to drain off some moisture.

Meanwhile, put the onion, garlic, olives and 1 tablespoon of the oil in a medium pan and cook on low heat for 5 to 6 minutes, to soften the onion completely. Remove from the heat and stir in the panko, herbs, capers, and some pepper. Taste and add salt, if necessary.

Wipe the insides of the tomatoes with a paper towel, then fill them with the herb stuffing, pressing down very gently as you go. You want a nice dome of stuffing on top.

Place the tomatoes in a greased ovenproof dish and drizzle lightly with the remaining oil. Bake for 35 to 45 minutes, or until the tomatoes soften. Serve hot or warm. Serve also with a little salad of seasonal leaves and a few broken pieces of robust goat cheese.